Where do Yellow-Eyed Penguins Live? 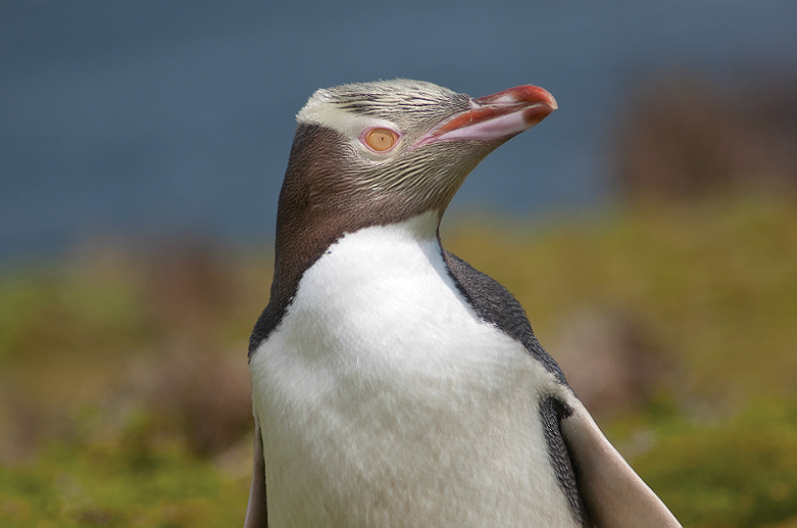 In the seabird capital of the world, New Zealanders bestow immense admiration and pride upon their nation’s diverse and rare bird species. Due to its geographic isolation, New Zealand offers a unique environment for an array of species to evolve in distinctive ways. Many of the birds found here are endemic, which is to say they are found nowhere else on Earth, and they are particularly charismatic in appearance and habits.

An annual New Zealand Bird of the Year competition is taken so seriously that avian elections rival the popularity of politics! The competition is organised by Forest and Bird, a collective of conservationists, science communicators and students inspiring the nation with lively social media campaigns and events. With a membership of over 80,000 impassioned individuals and no government funding, Forest and Bird is New Zealand’s leading independent conservation organisation. In 2019  the annual Bird of the Year competition winner was the rare and distinguished Yellow-eyed Penguin/Hoiho. Tall and robust, with a distinctive yellow band of feathers passing across the nape and around the eyes, the Yellow-eyed Penguin is highly unusual and sadly, vanishing at a rapid rate.

Where do Yellow-eyed Penguins live?

Known in Māori as Hoiho, the Yellow-eyed Penguin lives and breeds in the Southeast of the South Island, on Banks Peninsula, and on Stewart Island and its outliers, namely Codfish Island, the Auckland Islands and Campbell Island. The Subantarctic population is considered genetically distinct from that of the New Zealand mainland.

How many Yellow-eyed Penguins are left in the world?

Listed on the IUCN Red List as critically endangered, the Yellow-eyed Penguin is considered one of the rarest penguins on Earth. In the year 2,000, their populated was at an estimated 6,000-7,000 individuals, but has now plummeted to around 4,000, with a mere 1,700 breeding pairs remaining. Experts predict that without drastic intervention, the Yellow-eyed Penguin will disappear from South Island and Stewart Island within 20-30 years, with some scientists speculating their demise to be forthcoming even as soon as 10 years from now.

While Yellow-eyed Penguin facts are intriguing to birders, they remain relatively unknown to the general public. However, the Bird of the Year competition has become an incredible voice for New Zealand’s unique native birds, raising awareness about their habitat and the threats contributing to their decline. It is truly a national passion and, during the election period, each avian candidate has its own campaign manager with candidate memes taking over the internet and full-sized billboards decorating the towns! While it is a triumph that the Yellow-eyed Penguin was awarded 2019 Bird of the Year, results also tragically highlight the severity of their threatened status. The Yellow-eyed Penguin received more than three times as many votes as there are individual birds remaining on Earth.

What Threatens the Yellow-eyed Penguin?

Threats to the Yellow-eyed Penguin are numerous, ranging from human disturbance, predation, fisheries interactions, disease and habitat loss. Upon spotting this distinctive penguin, a common question is, what do Yellow-eyed Penguins eat? The answer is closely tied to their demise. Climate change and unsustainable fisheries have led to a severely compromised marine ecosystem, which translates to a less diverse and lower-quality diet for the Yellow-eyed Penguin. Warming oceans are leading to substantial shifts in food availability and fishing techniques such as bottom trawling are damaging their feeding grounds. Sadly, the penguins themselves often get caught in fishing nets. At sea, they are also vulnerable to predation by sea lions, sharks, barracuda and fur seals. On the New Zealand mainland, adult Yellow-eyed Penguins are subject to attack by dogs, while chicks are particularly vulnerable to introduced predators such as feral cats, ferrets, and stoats. Increasingly fragmented and diminished habitat compromises their reproductive success. Furthermore, both chicks and adults alike regularly succumb to disease. When a population is already so small, it becomes much more vulnerable to disease than a robust population, which is adaptable and more easily able to bounce back from epidemics. 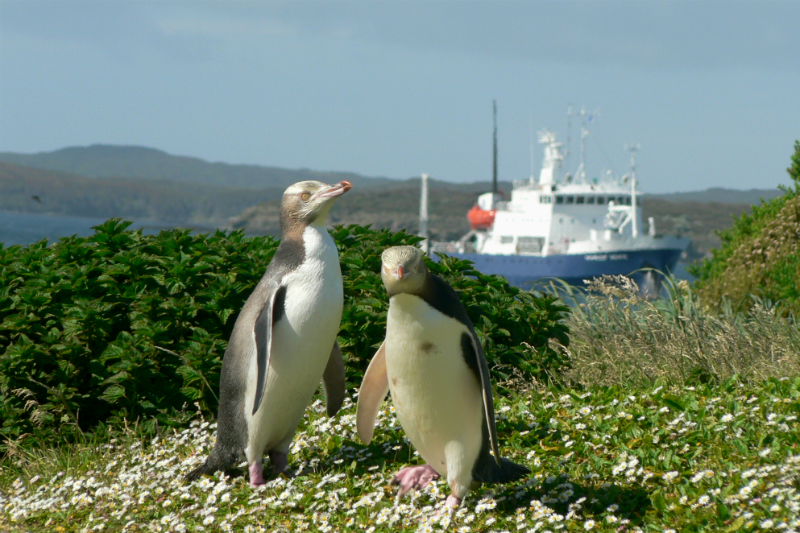 How to See Yellow-eyed Penguins?

Given their volatility and threatened status, it is truly a disappearing privilege to spot a Yellow-eyed Penguin in the wild. Due to the remoteness of the Subantarctic Islands, the best way to experience the raw beauty and exceptional birding opportunities of this unique part of the world is through a Subantarctic Islands cruise. Visiting this astoundingly fertile region by way of sea makes travel to the Auckland Islands and Campbell Island, both comfortable and infinitely rewarding.

All of our Subantarctic expeditions visit Enderby Island in the Auckland Islands, a wondrous island group of high cliffs and deep fjords, as well as distant Campbell Island. Actually shaped like a bird, Campbell Island has a colored history rich in legend. Our 8-day voyage 'Forgotten Islands of the South Pacific' offers a nice introduction to the Subanarctic Islands, visiting The Snares, Campbell Island and the Auckland Islands. On 'Beyond Fiordland: New Zealand's Wildest Islands' intrepid guests explore The Snares, Campbell and Auckland Islands before visiting Stewart Island's wildlife-rich Ulva Island and the majestic surrounds of Fiordland. Our expedition “Galapagos of the Southern Ocean: Subantarctic Islands” lives up to its name, immersing you in a precious environment so biodiverse it can only be compared to Ecuador’s Galapagos Islands. For an immersion into what is known as the Albatross Latitudes, our “Birding Down Under: Subantarctic and Chatham Islands” expedition delves into the islands of Snares, Bounty, Antipodes, Auckland, Campbell, Macquarie and the Chatham Islands, which collectively house the most diverse congregation of seabirds on Earth. Lastly, our 30-day voyage down to the Ross Sea, Antarctica, 'In the Wake of Scott & Shackleton' visits New Zealand and Australia's Subantarctic Islands on its journey to, and return from, the frozen continent.

An Auckland Islands tour is an otherworldly adventure into one of the most exceptional regions on Earth, abundant in endemic flora and fauna unique to the subantarctic climate and existing alongside a myriad of wildlife such as Albatross, Penguins, Petrels, Prions, Shearwaters, Sea Lions, Fur Seals and Elephant Seals. A guided cruise to Auckland Islands with our knowledgeable and passionate guides beckons an era, long forgotten, of early explorers venturing into rugged frontiers of staggering beauty. The Yellow-eyed Penguin is but one of many unforgettable animals to be found in this epicentre of thriving biodiversity and rarefied exploration.