We had a great zodiac cruise along the North-East coast of Medny Island in the late morning.  As one of the boats rounded the corner, we saw a single sea otter female. She was rubbing her paws vigorously and behaving in a peculiar manner.  We turned the engine off and as did not seem to be disturbed by the boat as we watched her from the distance of about 30 metres.

All of a sudden she started rolling in the water, lingering in the bottom-up position.  When she rolled back on her back we saw that she has something large on her chest. The female had just given birth to a pup!  We were privileged to witness and photograph the miracle of birth 30 metres in front of our zodiac!  It was the most magical and amazing moment!  The female was holding the pup on her belly, cleaning it of the amniotic sac that it was born in.  A minute or so after she pulled the pup out we could hear it scream – the first cry of this brand-new little sea otter.

As soon as we realised what had just happened and drifted a little away from the scene, we slowly started the engine and pulled out to not disturb the mother and her newborn.  By the time we left, the mother has almost finished cleaning the pup and placed it head down on her belly in the position comfortable for nursing.

We wished the little otter all the best in life and departed to leave them at peace. 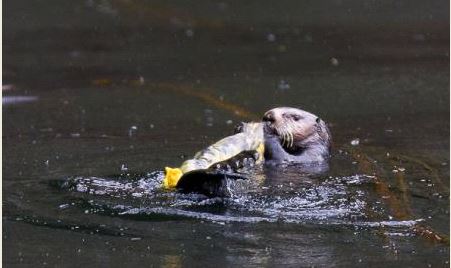 Arctic Foxes, Sea Otters and Humpback Whales
We are cruising northwards this morning and are scheduled to arrive at Karaginskiy Island shortly after lunch for an afternoon of birding in some...READ MORE
Stunning views of Steller's Sea Eagles
We are underway on our third expedition of our Russian Far East season - 'Kamchatka Coast: Siberia's Forgotten Coast'.  We sailed from Petropavlovs...READ MORE
Successful 'Sea of Okhotsk' expedition ends in Magadan
Our Sea of Okhotsk expedition finished today (Monday 20th June) with all the passengers disembarking in the Port of Magadan.  The weather was fin...READ MORE
Download our 2020/2021 Brochure
Get our newsletter
Send Message
Call Us
Receive e-News
Download Brochure