Cruising alongside Steller's Sea-eagles on the Zhupanova River 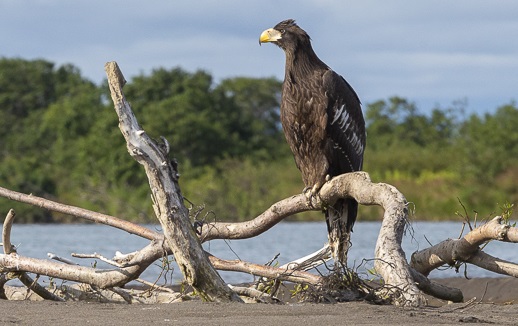 After leaving the Commander Islands and sailing overnight to the Kamchatka mainland, we started the last day of our expedition at Olga Bay this morning. From the deck watched a seal resting in the water in the 'jughandle' position with its flippers and head held above surface of the water - the commonly used and comical pose is actually very cunning as the exposed flippers absorb the heat from the sun and the warm air.

Later, boarding the Zodiacs for our final cruise the sun breaks through the clouds and catching the ripples we make as we skim over the surface of the Zhupanova River. Scattered along a horizon are ancient volcanoes and mountains and, for the first time on our voyage, we see trees thanks to our southern location. Passing by a fish factory which has attracted the attention of dozens of Largha/Spotted Seals, Expedition Leader Samuel and Lecturer Agnes spot two adult Steller's Sea-eagles in the trees alongside us followed by two more in flight and a feathered, dark-brown juvenile perched in a nearby tree sporting a humorous, spiky feathered mohawk.

Further down the river we spot a chick high up in a nest, its parents cruising the thermals above. Known for building large nests, this species also adds to the nest each year with some reaching up to 1.5-metres high and 2.5-metres wide. Back on board Spirit of Enderby we enjoy a four-course farewell dinner prepared by the hardworking chefs before gathering in the lecture room to relive the magic of the last 13 days.

Discovering the Wildlife and Culture of Bering Island
As Spirit of Enderby continues our 'Jewel of the Russian Far East' journey along the western extremity of the Aleutian chain, we spend our third ...READ MORE
Sea Otters, Birds and a Blue Arctic Fox on Medny Island
Our full day at Medny Island starts with an early breakfast followed by a landing at Preobrazhenskaya Bay. Medny, meaning 'copper' in Russian, is...READ MORE
Exploring Bering Island, Commander Islands
Making our way to the Commander Islands, we take the opportunity to learn more about this archipelago with an introduction from Yulia and enterta...READ MORE
Download our 2020/2021 Brochure
Get our newsletter
Send Message
Call Us
Receive e-News
Download Brochure