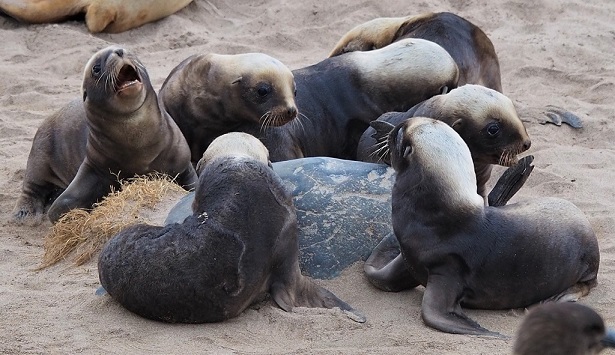 After heaving and rolling our way from the Snares south, we were glad to find respite in the calm anchorage of 'Sarah's Bosom' in the early hours of Christmas morning. Dawn revealed 30-knot westerlies and a sodden clag hanging over low-lying Enderby Island. Once ashore, in two parties we traversed the islands boggy centre via a boardwalk to the northern cliffs, where gusts exceeding 50-knots threatened to flatten us against the coastal peat turfs. Here our two bands parted ways, one undertaking a clockwise circumnavigation of the remainder of the island, the other tenaciously exploring the northern cliffs and back beaches of Sandy Bay. Both troupes were treated to bursting floral displays of giant pink and purple subantarctic carrots (Anisotome latifolia) while in the forested ribbons of th e island, the Southern Rata was beginning to break crimson bud. All over the island sub-adult male New Zealand Sea Lions sought opportunities for spirited rendezvous with passing wanderers, while both crews had dynamic exchanges with local pairs of New Zealand Falcon. All over the island we found Yellow-Eyed Penguins, Red-Crowned Parakeets, Macquarie Island Cabbages, Banded Dotterels and Auckland Island Teal, and those at the front of our forces were even treated to fleeting escapes of Auckland Island Snipe. Back at Sandy Bay the spectacle of Sea Lion battle, birth, and the generalities of harem life kept us captivated for much of the afternoon. Back aboard the ship, a seven-course degustation, courtesy of our galley-champions, lead onto an exhausted but overwhelmingly satisfied Christmas collapse into slumber.

Orca and Snares Crested Penguins
Image (c) Alex Fergus Pre-dawn we spotted the craggy outline of the Snares. In spite of a naysaying forecast, we managed to find enough lee to di...READ MORE
Full Moon Over Spirit of Enderby
Image (c) H Dohn It's still dark when we pull into the calm waters of Bluff's South Port and park up at the wharf. Enjoying our final breakfast t...READ MORE
Island Hopping in Dusky Sounds
Image (c) C Todd Still buoyed from yesterday's high, our voyagers started with the day with a pre-breakfast Zodiac cruise navigating the network o...READ MORE
Download our 2020/2021 Brochure
Get our newsletter
Send Message
Call Us
Receive e-News
Request Brochure