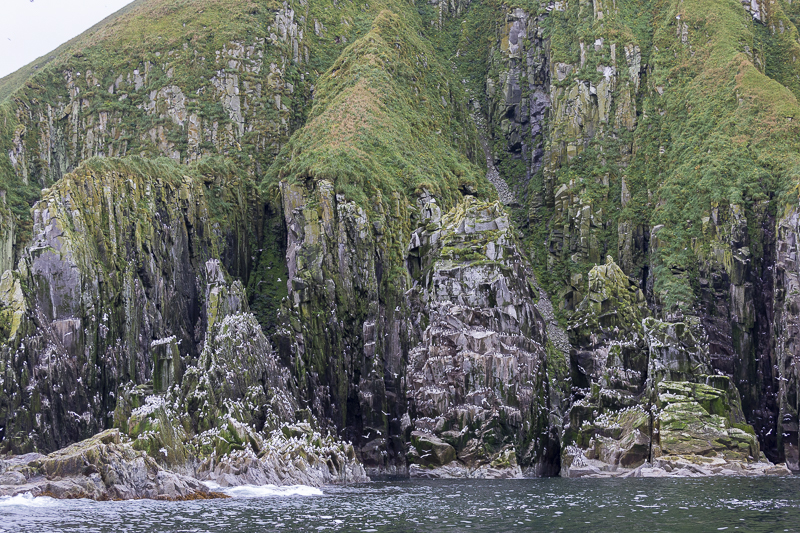 Our full day at Medny Island starts with an early breakfast followed by a landing at Preobrazhenskaya Bay. Medny, meaning 'copper' in Russian, is the Commander's other large island and, true to its Russian name, is characterised by beautiful, blue rocks.

After climbing a nearby hill, we stand at its summit and take in the panoramic view of the bay's astounding landscape - sharpened mountains are scattered along its shore, and endless tundra cloaks the wild and untouched land. Birds fly and glide along the mountain peaks, among them we observe wrens, Gray-crowned rosy finch and Glaucous-winged gulls - all endemic to the Commander Islands - and Pechora pipits, a raven and Snow buntings.

Along the shore we notice that a small, dark Blue Arctic fox is watching us, another species endemic to the Commander Islands. It lets out a series of howls alerting the others of our arrival. During our second landing for the morning, we continue south to Gladkovskaya Bay. Dozens of jellyfish surround our Zodiacs, the transparent orbs lightly thud against the rubber hull as we pass by. Walking along the river, en route to a lake located in the heart of the island we notice the indentations left by spawning salmon in the shallow water. 'Dug' by salmon repeatedly swishing their tails back and forth to create hollows for their eggs, these same eggs, in a few years, will become the salmon that will return to the same river and complete this circle of life.

After a well earned lunch we enjoy a Zodiac cruise along the bird cliffs of Cherny Cape, or as our Expedition Leader Samuel described it: "one of the best bird cliffs I have ever seen". Cruising between the huge rocks we were accompanied by the orchestra of thousands of birds twittering, chirping, squawking and making numerous other noises. Among them we spot Black-legged Kittiwakes, the rarer Red-legged Kittiwakes, Common and Brünnich's Guillemots and learn how that at just 21 days the chicks are forced to jump from the high cliffs and start swimming and flying with their fathers. For the first time on this voyage we spot a Red-faced cormorant along with the astonishingly beautiful Horned and Tufted Puffins. We end the day watching Sea otters floating on their backs, paws on chest, around our Zodiacs, including a female grooming the wet fur of her pup atop her chest.

Exploring Bering Island, Commander Islands
Making our way to the Commander Islands, we take the opportunity to learn more about this archipelago with an introduction from Yulia and enterta...READ MORE
Picking Blueberries on Karaginskiy Island
As Spirit of Enderby continues sailing south we notice how autumn tundra getting richer and thicker. While exploring the verdant, endless norther...READ MORE
Bear Watching and Walking with a Fox
After an early breakfast we silently made our way into Koryakskiy Reserve where we sat among the tundra surrounded by pines, mushrooms and berrie...READ MORE
Download our 2020/2021 Brochure
Get our newsletter
Send Message
Call Us
Receive e-News
Download Brochure