How to Visit the Auckland Islands

Commonly referred to as the ‘Galapagos of the Southern Ocean’ is the rugged and remote biodiversity hotspot known as the Auckland Islands. One-third of the way from New Zealand to Antarctica, perched in the stormy seas of the roaring forties and furious fifties, are windswept, tussock covered islands of dramatically steep cliffs and deep valleys. The Subantarctic Islands are nature reserves and UNESCO World Heritage Sites, home to some of the most abundant and rare plants and animals on Earth, and rich in human history echoing tales from the Heroic Age of Exploration. Due to their remoteness and uninhabited nature, Auckland Islands tours require foresight and planning. We have compiled answers to some of the most common questions about Subantarctic Islands travel, where wildly beautiful isles teeming with exhilarating adventure await at the edge of the Earth. 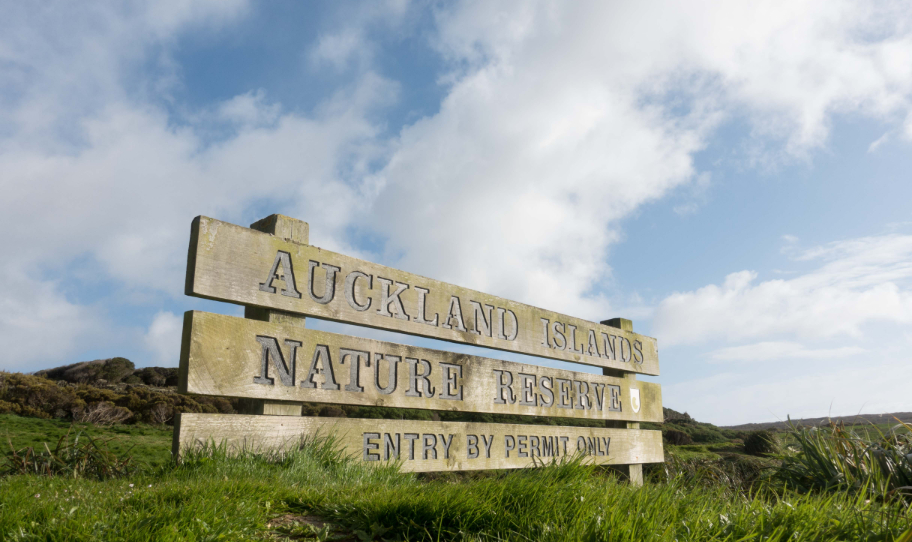 How to Get to the Auckland Islands

At 725 km south of New Zealand, the Auckland Islands are an isolated and vulnerable preserve for a rare and abundant concentration of unique wildlife. Since entry permits from the Department of Conservation are required to visit these far-flung ecosystems, the best way to visit is undoubtedly through an all-inclusive Subantarctic Islands cruise. Small ship expeditions to these richly biodiverse islands offer an intimate experience of rarely visited islands accessible by permit only.

For those travelling with Heritage Expeditions, international flights arrive at Auckland Airport, where you then transfer to Invercargill at the southern tip of the South Island. We advise guests to arrive in Invercargill at least one day prior to embarkation to account for any potential travel or luggage delays. The following day, after a leisurely breakfast, travellers meet in town centre for transfer to Port of Bluff to embark the ship and begin the adventure.

Along the way, Heritage’s Subantarctic cruises spend the day exploring the rugged coastlines of the North East Island in The Snares, claimed by some to be home to more nesting seabirds than all of the British Isles together. Expect an overnight sail before landing in the Auckland Islands in the early morning.

There are a variety of options in considering an Auckland Islands tour, depending on which additional islands you wish to visit, and how long you wish to spend exploring the Subantarctic.

Over an exhilarating eight-day expedition, ‘Forgotten Islands of the South Pacific: Subantarctic Islands’ is a shorter cruise, including the bustling seabird colonies of the Snares, the endless fields of giant wildflowers on Campbell Island, as well as the dynamic Auckland Islands. Your time visiting Auckland Islands focuses on the pinnacle highlights. Enderby Island, touted to be the most beautiful and striking of the group, is home to a variety of seabirds, including a shy Mollymauk colony. You are also likely to spot the rare Hooker’s, or New Zealand, Sea Lion here, lounging along Sandy Bay, one of only three breeding grounds. Our second day in the Auckland Islands is typically spent exploring Auckland Island and its secluded harbours and inlets. Depending on weather and sea conditions, excursions may include Zodiac cruising along the Rata fringed coastlines, clamoring up one of the island’s capes for expansive views and Albatross sightings, or visiting one or more of the historic sites on the island.

The expedition, ‘Galapagos of the Southern Ocean: Subantarctic Islands’ extends for 13 days and, in addition to the Auckland Island visits outlined above, this cruise also includes two days at Macquarie Island, the only place on Earth where the Royal Penguin breeds. Macquarie also provides an excellent refuge for Southern Elephant seal pups and breeding grounds for thousands of King, Gentoo and Rockhopper penguins as well as Northern and Southern Giant Petrels.

Lastly, if you are looking for the ultimate adventure, join the 19-day cruise, ‘Birding Down Under: Subantarctic and Chatham Islands.’ This is the most comprehensive of our Subantarctic tours, visiting the Snares, Macquarie Island, Antipodes Islands, Campbell Island, Auckland Islands, Chatham Islands, and finally, the Bounty Islands. This cruise is exceptionally enjoyable not only for birders, but also for photographers and those interested in island ecology, botany, geology, as well as the history behind Southern Ocean exploration. Like the two expeditions outlined above, time in the Auckland Islands is concentrated on Enderby Island and Auckland Island. Enderby is already a birder’s paradise, home to the famous Southern Royal Albatross and Northern Giant Petrel to parakeets, Bellbirds and the endemic shag, teal and snipe. However, the additions on this voyage of the Antipodes, Bounty, Chatnam, South East, and Mangere Islands invite a richness of several other diverse and abundant bird species to observe and rugged island scapes to discover. 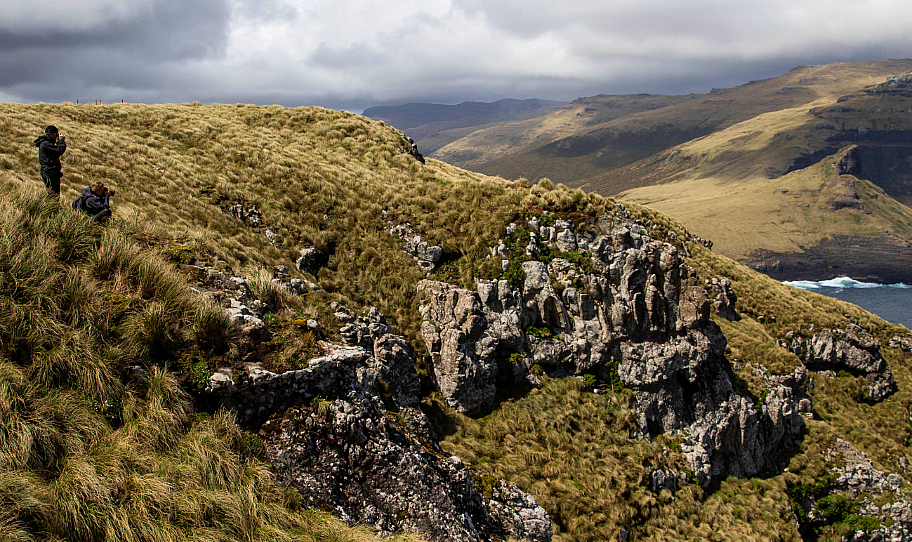 Does Anyone Live in the Auckland Islands?

When considering the harsh and rugged conditions, it is reasonable to pose the question, is Auckland Island uninhabited? Today, no one lives in these dramatic Subantarctic reserves. Archaeological remains, including middens, suggest Polynesians reached the Auckland Islands as early as the 13th century; however, European settlers did not arrive at these isolated islands until 1806. Auckland Island and Enderby Island are the remains of two ancient volcanoes and collectively cover an area of 570 km2. Their human history is colored by commercial sealing, numerous shipwrecks, wartime coast watching and attempted settlement by Maori and European settlers, castaways, and Coastwatchers during WW2. Since the early 1900’s, human presence has receded to an echo and the landscape is instead dominated by flowers of prehistoric proportions and raucous colonies of seabirds, sea lions, and penguins.

Who Owns the Auckland Islands?

The Auckland Islands are listed with the New Zealand Outlying Islands. While considered an immediate part of New Zealand, they are not part of any region or district, but instead named an “Area Outside Territorial Authority.” Combined, the Subantarctic Islands marine reserves of the Auckland, Antipodes, Bounty and Campbell Islands form the largest natural sanctuary in New Zealand and are designated World Heritage Sites. Tours to Auckland Islands is strictly regulated in order to protect these unique and vulnerable ecosystems. 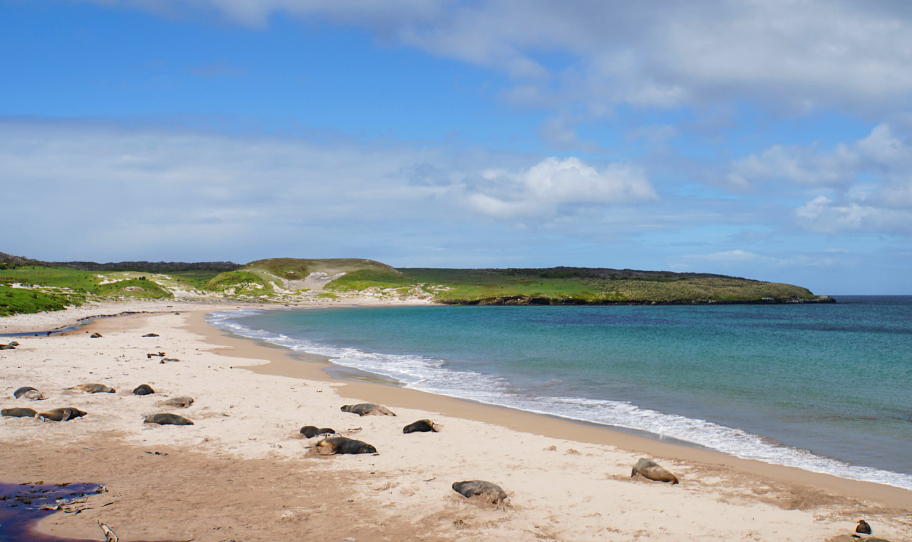 Enderby is considered to be the pearl of the Auckland Islands. Steep cliffs marked by vertical columns of lava, etched in moss and bird guano resemble towering works of art. The island’s dramatic cliffs are topped with blooms of pink gentiana and purple myosotis as well as the red Rata blossoms, white tree daisies, magnificent yellow bulbinella flowers, and the intriguing Macquarie Island cabbage (eaten by countless shipwrecked mariners). Those lucky enough to visit Auckland Islands enjoy leisurely walks through the Rata forest, accompanied by Tui and Bellbirds, Red-crowned Kakariki, Pippets, Tomtits, and Silvereyes. Hoards of Yellow-eyed penguins, Hooker’s Sea Lions and Royal Albatross–with their impressive 3.5 wingspans–dot the cliff tops amongst clumps of sedge and tussock dancing in the breeze. Skirting the island are floating masses of bull kelp and a palette of red and green algae painting the deep blue sea.

The Subantarctic Islands reveal a poetic juxtaposition between rugged majesty and delicate beauty. Absent from many guidebooks and travel brochures, the islands don’t even appear on most maps of New Zealand’s South Pacific. Steep cliffs etched by the occasional waterfall and tree daisy forests create a magnificent backdrop for endemic bird life, Hooker’s sea lions, and Elephant seals. The Auckland Islands are not only a thriving ecosystem, but also rich in the historical intrigue of shipwrecks and wartime coastwatcher’s stations. Furthermore, the journey to reach the far Southern edge of the Earth is by way of some of the most isolated bodies of water on the planet, where one is apt to see Dusky Dolphins and an array of different whale species.

Auckland Island is the main and the largest island of this remote archipelago, measuring 40 km long and 12 km wide at its widest point. The remains of two ancient volcanoes which have been subsequently cut by glaciers, Auckland Island boasts staggering cliffs on the west and quaint fjords to the east. To the south, Carnley Harbour sits between the mainland of Auckland Island and the smaller Adams Island. A large natural harbour opening to islands overlapping into the distance, Carnely Harbour was formed from the underwater crater of an extinct volcano. It is an incredible place to observe a Shy Mollymawk Albatross colony and even the majestic Wandering Albatross–a bird boasting the longest wingspan on Earth, which can reach up to 11 feet 6 inches! Other activities might include visiting the abandoned World War II Coastwatchers’ station or the remains of a ship wrecked in 1864, the Grafton, and the now famous subject of two books written by survivors. Although sometimes called the ‘Forgotten Islands’, these spectacular wildlife reserves and “natural history treasure-house” will surely not be forgotten to you! 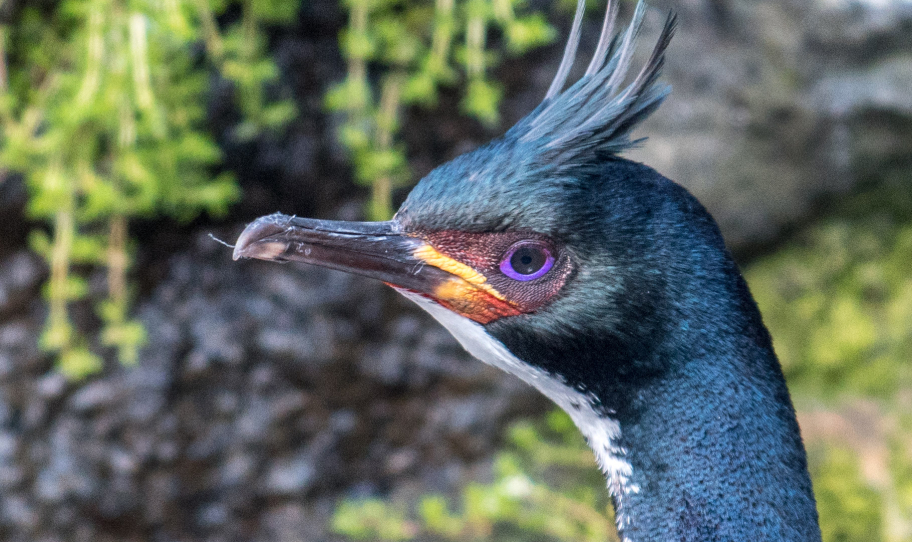