Why is the New Zealand Sea Lion Endangered?

For travellers with a passion for remote exploration and encounters with wild and unusual animals, New Zealand is a mesmerising destination. Even wilder yet are the outlying Subantarctic Islands, one of New Zealand’s three UNESCO World Heritage Sites and one of the most rugged and untouched places on Earth.

The Subantarctic Islands are home to the rarest and most endangered species of Sea Lion in the world, the New Zealand Sea Lion (also known as Hooker’s Sea Lion or whakahao in Māori). Their home, an exceptional landscape of volcanic islands marked by sheer cliffs and deep fjords, is a world unto itself. The Subantarctic Islands lie 725-kilometres from New Zealand and are composed of five distinct island groups, including the Auckland Islands and Campbell Island. Poised between the Antarctic and Subtropical convergences, the surrounding seas are unparalleled in productivity, biodiversity, marine life density, and endemism. 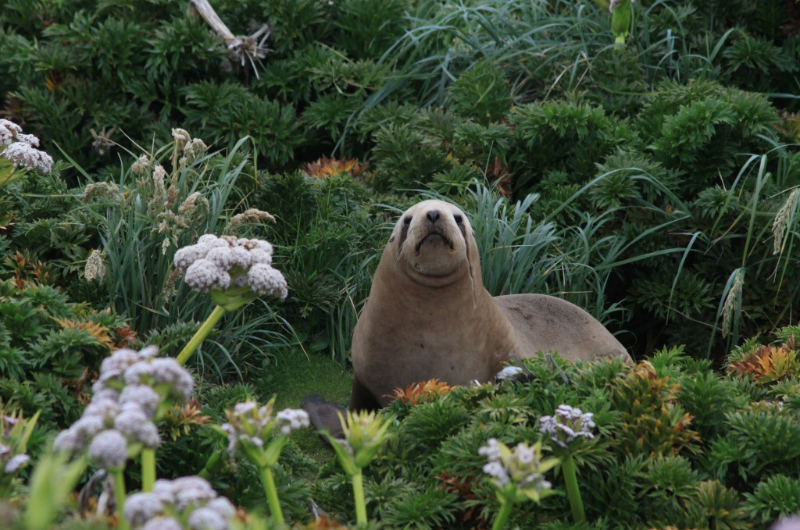 New Zealand Sea Lions are majestic and rare animals, truly a sight to behold. They have the remarkable ability to dive as deep at 600 metres and to hurl themselves down a beach at 25 kilometres-per-hour, which is quite impressive for an animal in which males can reach up to 450 kilograms and three metres in length! Interestingly, they are classified as eared seals, as opposed to true seals, because of their rather charismatic external ears. They also have the unique ability to turn their hind flippers forward and are lacking fur on the underside of their flippers. Genetically related to the bear, the sea lion’s razor-sharp claws are sheathed within a membranous flipper which allows them to effectively propel themselves through the water.

New Zealand Sea Lions are classified by New Zealand’s Department of Conservation as Nationally Critical and, in 2015, the species was moved from vulnerable to the more serious endangered category on the International Union for the Conservation of Nature's Red List. However, there is hope and, fortunately, an organisation of concerned citizens, scientists, educators and artists are mobilising to save the New Zealand Sea Lion. The organisation Forest & Bird is campaigning for the Government and the fishing industry to adopt a Zero Bycatch Goal. They are also advocating a shift in the fishing industry towards jigging (a squid fishing method that doesn’t kill Sea Lions), and insisting that the Department of Conservation must have more resources and abilities to protect Sea Lions.

As isolated as this region is, travellers on an Auckland Islands tour often wonder what threatens New Zealand Sea Lions and how this unique and endemic creature has become at such high risk of extinction. A Subantarctic Islands cruise is an adventurous and immersive way to understand the plight of New Zealand’s distinctly evolved flora and fauna on this far-flung corner of the planet.

New Zealand Sea Lions once lived around the entire coastline of New Zealand, but the population was decimated by excessive and unsustainable hunting for food and fur. Heavily depleted first by the Maori and later by European settlers, Hooker’s Sea Lion was considered extinct on the New Zealand mainland by the 1800’s. In 1993, however, a lone and pregnant female traveled all the way from the Subantarctic Islands to the Otago Peninsula and birthed the beginning of a small breeding population on mainland New Zealand. Given that females generally do not travel far from their place of birth, her unusual story became a beacon of hope. 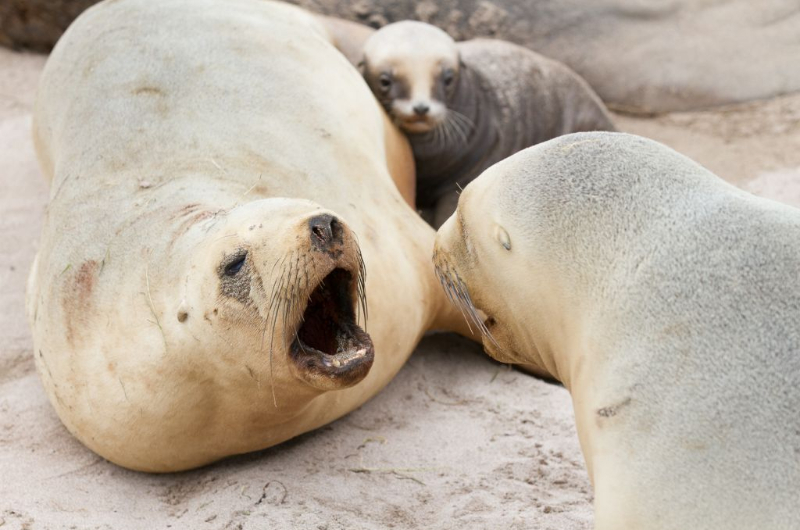 Nevertheless, once again and decades later, the species finds itself a step away from extinction, this time due to a host of threats, both ecological and human-induced. Today, the world’s most threatened Sea Lion species is reduced to a population estimated to be between 11,600 and 15,200 individuals and limited to the New Zealand Subantarctic Islands, with small colonies on Stewart Island and along the Southeast coast of Otago. As the Auckland Islands form the breeding ground for 95 per cent of the New Zealand Sea Lion population, Auckland Islands tourism represents a critical opportunity to share this precious and perishing species with the world. Here, pup numbers have tragically plummeted by a startling 50 per cent since 1998.

While the reasons for their decline are varied, fisheries are the most pervasive and relevant threat to the New Zealand Sea Lion population. Subantarctic squid, scampi trawl fisheries, and southern blue whiting fishery are the primary fisheries operating in their foraging grounds. Not only do these industries deplete their food source, but the squid trawl nets in particular are notorious for accidentally trapping Sea Lions. Alarmingly, fisheries operate from February to May, overlapping with the first four months of Sea Lion nursing. While nursing, females must limit their foraging range, making them more susceptible to colliding with squid trawl nets around the Auckland Islands. This is exacerbated by the fact that females have a lower survival rate than males and when caught, most females are nursing and pregnant, meaning that they will leave behind a starving pup, destined to die without a mother. On a positive note, fisheries have developed tools called SLEDs (Sea Lion exclusion devices) in an attempt to prevent accidental bycatch; however, their efficacy is debatable.

Disease has had a tremendous impact on an already volatile New Zealand Sea Lion population, particularly vulnerable due to their restricted range. During disease outbreaks, pups are most at risk with a loss of 21 to 53 per cent during recorded bacterial infections. Other risk factors for the New Zealand Sea Lion include starvation due to decreased prey availability, pups falling into holes (specifically rabbit holes where they have been introduced), and aggression by male Sea Lions.

'Birding Down Under: Subantarctic and Chatham Islands' is the only expedition to cover the collection of the Snares, Bounty Island, Antipodes Islands, Auckland Islands, Campbell Island, Macquarie Island and Chatham Islands, all of which are considered a birder’s greatest paradise, in a single voyage.

Our expedition cruise, 'Forgotten Islands of the South Pacific: Subantarctic Islands' includes a visit to Enderby Island, one of the most alluring islands of the group and home to a breeding population of New Zealand Sea Lions.

'Beyond Fiordland: New Zealand's Wildest Islands' is an 11-day adventure expedition down to Campbell and the Auckland Islands as well as Stewart Island's predator-free native bird sanctuary Ulva Island and into majestic Fiordland.

Lastly, 'Galapagos of the Southern Ocean: Subantarctic Islands' invites a deep immersion into the rich biodiversity of the Subantarctic Islands with exclusive birding opportunities and otherworldly scenes such as colonies of Elephant Seals lounging in the sand dunes.

To cruise to Auckland Islands is to voyage as far south as possible before entering the South Pole. As otherworldly and majestic is the landscape, so too are its unusual inhabitants and an opportunity to see the endangered New Zealand Sea Lion in its element is a pinnacle highlight of an Auckland Islands tour. 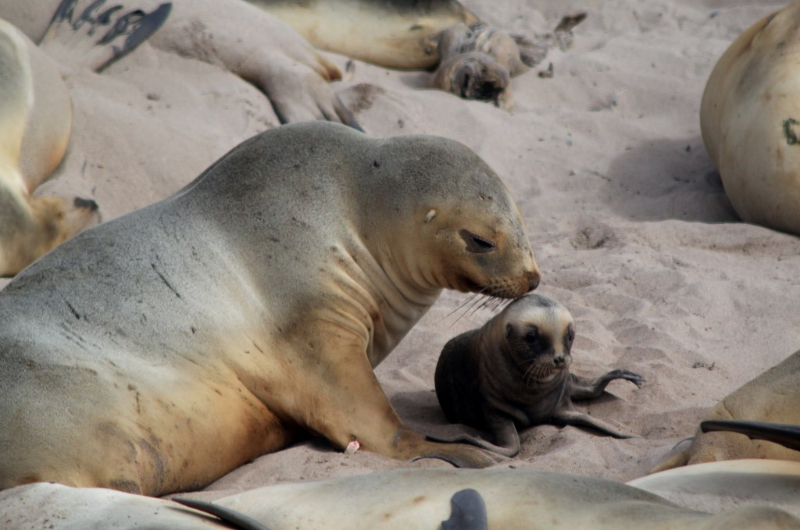